Bonnets are an image of quaintness--of bygone days. Although they're still used, for practical reasons, by women in the farming world, they seem a frivolous fashion accessory from another century.

This headgear was essential for survival on the hot, dusty Oregon Trail. More functional than fanciful, the bonnet's goal was to prevent its user from sunburn, sunstroke and other UV-based hazards.

There was no sunblock on the Oregon Trail. Men wore broad-brimmed hats for the same reason. This headgear was hot and uncomfortable under the merciless rays of the sun. But without this protection, the Oregon Trail emigrants would have been utterly miserable.

In these days before sunglasses, bonnets also helped to greatly cut the glare of broad daylight. It thus allowed travelers keener vision, in case of unexpected dangers--or to spot roadside goodies, such as firewood, "buffalo chips" or cast-offs of prior Trail travelers.

People still wear hats, of course. Baseball caps, knit caps and hoodies are our modern bonnets. We have more sophisticated options to protect us from melanoma, sunburn or other issues. But we still wear hats--both for fashion's and for function's sake. This is one of the many small details that link us to our Oregon Trail-traveling forefathers.
Posted by Frank M. Young at 11:36 AM No comments:

Some Horse Sense About Oxen--the Transportation of The Trail! 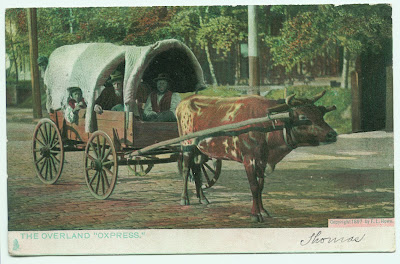 If you've ever seen an old Hollywood Western about frontier days, the Oregon Trail, or other Westward migrations, you've been fed a small falsehood.

Those movies, while quite entertaining, insisted on using horses as the animals who conveyed the migrants' covered wagons to the new Territories.

In truth, oxen were the preferred vehicle for Oregon Trail travelers. They cost less than horses, were sturdier, and needed less maintenance. Oxen ate grass, not oats. If there was green on the ground, they could graze to their heart's (and stomach's) content after a long day's trek on the Trail.

Next time you see a classic Oregon Trail movie, like the Jimmy Stewart-led 1952 Bend of the River, or the grim, excellent 1951 film Westward, the Women, try to find an ox in the cast! There may be one or two in the background, but the covered wagons will be drawn by horses.

Our graphic novel hopes to put an end to this horsey myth. Oxen rule!
Posted by Frank M. Young at 3:48 PM No comments: 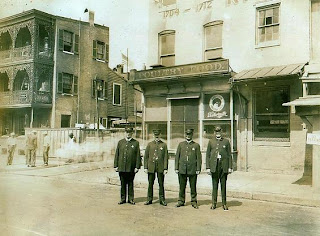 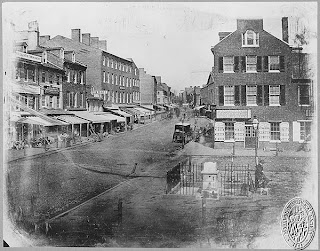 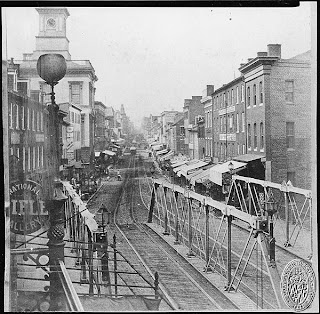 In 1848, the year in which THE ROAD TO DESTINY takes place, Baltimore, Maryland was the second-biggest city in the United States. As these period photos show, it was a bustling, busy city. It was also rather grimy and ramshackle.

A city like Baltimore was a great place to be--as long as you didn't mind polluted air, the risk of catching diseases from the water, from refuse in the streets or from one of the many passers-by. It wasn't necessarily the best place to raise a family.

This was the decision of John Weston, the father of the family in our graphic novel. He has two children. One of them (Rebecca) is hardy and healthy. The youngest Weston, Charlie, is sickly, and the atmosphere of hectic Baltimore isn't doing him any good.

Charlie's health is one of the reasons John decides to pack up the life he and his family have known, and to head westward. 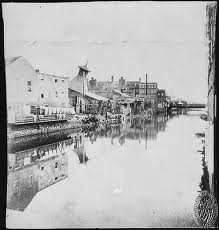 We didn't intend to "dis" Baltimore in our graphic novel. It seemed a practical place to launch the journey of the Weston family. To be fair, these unsanitary and health-threatening conditions plagued all large cities in the United States in the mid-19th century.

Things have gotten better since then, but pollution, pollen, and other particulate matter still cause urban sinuses to go out of whack. And it's still just as easy to catch a cold, via some careless soul sneezing on a bus, or in line at a grocery store.
Posted by Frank M. Young at 7:25 AM No comments: